Congratulations to Billy Bauer and Andreana Morey
Soft billing
Mon. Jan 1st 2018
Starting January 1, 2018 the Beachwood Emergency Medical Services, Inc. have partnered with Cornerstone Billing Company. With the proper approvals and participation of our borough's we have decid...
Read more »
2017 Spring MONOC EMT Graduation
Thu. Jun 22nd 2017
Congratulations to all the EMT students that graduated last night at the Ocean County Fire / EMS academy that successfully completed over 200 hours of instruction to get them ready for their State EMT...
Read more »
Memorial Day Parade & BBQ
Mon. May 29th 2017

On Monday, May 29th the Borough of Beachwood's Recreation Department will be hosting the Borough's Memorial Day Parade to be followed by an Antique Car Show, Kids festivities, DJ, and food at ...
Read more »
2016 in Review
Wed. Jan 11th 2017
On behalf of all the 2016 Line Officers and Corporate Officers we are happy to announce our final numbers for 2016 !!We would like to thank every single VOLUNTEER we have in our agency starting from C...
Read more »
Call History
Suspicious Structure Fire

At approximately 0530 hours on May 19th, the Beachwood Fire Department responded to the report of a structure fire on the 400 block of Capstan Avenue. The Pine Beach Fire Department also responded on the alarm as part of an automatic aid assignment to assist. The fire was found to actually be located in the rear of a property on the 400 block of Atlantic City Boulevard. The building was a storage shed used to house records and documents for an office building located on the property. Units 1611, 1631 and 3801 operated under the command of Chief Hull #1600 and Asst. Chief Allen #1610. The Beachwood First Aid Squad also responded to assist. 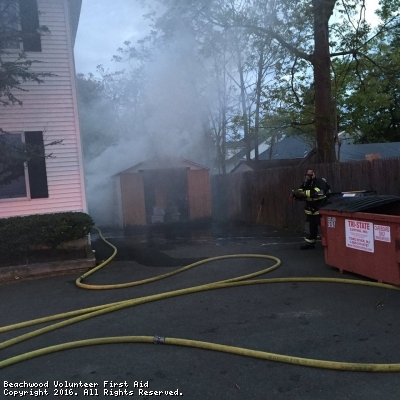 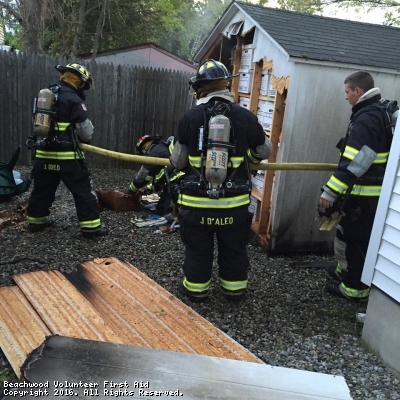 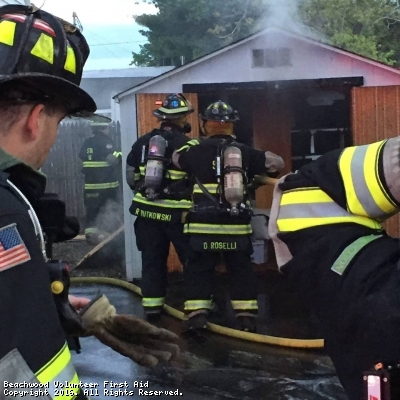 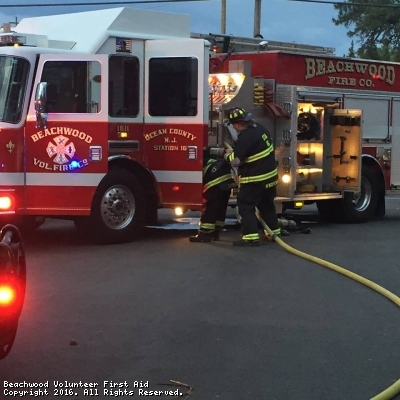 At approximately 1230 hours Beachwood & Pine Beach Fire Departments were dispatched to the report of a stove fire at an apartment located on the 100 block of Beachwood Blvd.  The building was formely Disbrow's Market and later Clancey's Video.  It is now a vacant commercial structure with attached apartments to the rear and second floor.  Upon arrival command units found the stove fire had progressed into a well involved kitchen fire.  Mutual Aid units responded f...

At approximately 0430 hours on August 23rd, the Beachwood Fire Department was dispatched to the report of a smoke detector activation at a residence on the 500 block of Halliard Avenue. Upon arrival, command units 1600 Chief Hull and 1610 Assistant Chief Allen found the exterior electrical meter arcing and on fire as well as a smoke condition on the first floor of the home. A second alarm was requested for the Pine Beach Fire Department and a FAST team from the Pinewald Fire Department as heavy ...

at 10:41 the Beachwood First Aid Squad was dispatched into Ocean Gate for a subject caught in a running lawn mower. Upon arrival of Ambulance 156 our crew found a male patient laying on the ground with severe trauma to his leg and foot areas. The decision was made to call for a Medivac helicopter to transport the patient to Jersey Shore Trauma Center. We would like to thank Ocean Gate Fire Department, Bayville Volunteer Fire Dept,, Ocean County Sheriff 911, Ocean Gate Po...

At approximately 9:00 PM last night all 3 Beachwood Emergency Services agencies responded to a motor vehicle crash at the intersection of Pinewald Road and Spruce Street involving 2 vehicles. Incident was lead by EMS Captain James Horn and Fire Chief Roger Hull. One subject was transported to Jersey Shore Medical Center by Monoc1 helicopter with two others transported to Community Medical Center. The Ocean County Sheriff's Department assisted at the scene with traffic. Great job done by all ... 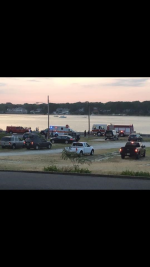 Beachwood EMS, Pine Beach PD, Pine Beach FD, Toms River Fire Department, USCG, & NJSP all were on the Toms River on the Pine Beach side for a boater in distress.  Beachwood Ambulance 158 transported 1 subject to the hospital for evaluation.  Thank you all for your services.

Laundry Room Fire:At 6:30 this evening Beachwood and Pine Beach Fire Department crews responded to a laundry room fire on the 100 Block of Capstan Avenue. Upon arrival, crews found an active dryer fire in the basement of the residence. The fire was quickly extinguished and the dryer was removed from the home. The residence suffered minimal damage. Crews also provided the residents with smoke detectors after finding none in working condition in the home. The Beachwood First Aid responded and assi... 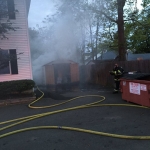 At approximately 0530 hours on May 19th, the Beachwood Fire Department responded to the report of a structure fire on the 400 block of Capstan Avenue. The Pine Beach Fire Department also responded on the alarm as part of an automatic aid assignment to assist. The fire was found to actually be located in the rear of a property on the 400 block of Atlantic City Boulevard. The building was a storage shed used to house records and documents for an office building located on the property. Units ... 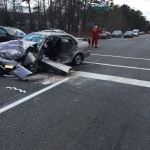 At approximately 2 PM the Beachwood First Aid responded to a motor vehicle crash at the intersection of Surf Avenue and Route 9, which required one occupant to be extricated from their vehicle. Fire Department personnel assisted the Beachwood and  with patient removal and care. It was determined that one victim needed to be transported to a trauma center via medical helicopter. A landing zone operation was set up at the Birch and Surf Recreation Park by the Manitou Park and Pine Beach ...

At approximately 3:15 hours this afternoon, the Beachwood Fire Department responded to the Elementary School to set up a landing zone for a medical helicopter and to assist the Beachwood Police and Beachwood First Aid Squad. The call was for an injured child who suffered a head injury after crashing while riding their bike with no helmet. MONOC Paramedics and helicopter unit arrived to treat child. After evaluation by medical personnel it was determined the child was better suited for ground tra... 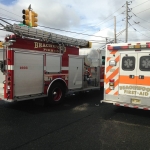 Monday February 8th we were dispatched to the scene of a motor vehicle accident with people trapped. Upon arrival crews found a black 2 door vehicle with extensive damage to the passenger side door. With help from the Beachwood and Pine Beach fire departments the patient was extricated. A total of 4 patients were transported to the hospital with help from the South Toms River First Aid.

On December 9th the Beachwood first aid was dispatched for a head on MVA at the Rt 9 and Rt 166 circle. upon arrival crews found one male patient entrapped in his vehicle. With help from the Beachwood Fire department the patient was removed. During treatment it was determined that the patient had significant trauma and called for a medivac. the patient was taken to Jersey Shore University Medical Center by SouthStar . Another patient was treated and transported to Community Medical center.

At aprox. 1500 hours on the Beachwood First Aid wad dispatched to a moror vehicle accident involving a person on a bicycle. 1st lieutenant Wojcik and 2nd Lieutenant Peck where first on scene and found a male laying on the ground. the patient had significant trauma to his body. The discussion to medivac the patient was made. With help from the Beachwood and Pine Beach fire departments a landi g zone was set up at the Birch and Surf park. The patient was transferred to the NJSP SouthStar medical h... 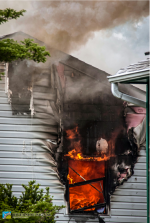 Beachwood First Aid Squad responded to a motor vehicle accident on the parkway 1/5/2015 at approximately 5:30pm. BFAS responded with two rigs and a first responder to mile marker 80 southbound. Upon Arrival our crews found 3 patients with minor injuries, all transport by ground to Community Medical Center.

Fly out from Beachwood Intermediate

On january 3rd at approximately 10:30 the beachwood first aid was dispatched for a fall victim. Upon arrival our members found a serious leg injury that required a medivac. With help from the Beachwood Vol. Fire Department and MONOC - New Jersey's Hospital Service Corporation medivac unit the pt was safely transported to Jersey Shore University Medical Center in neptune.

On October 4th the Beachwood first aid was dispatched to the scene of a reported structure fire .

On July 18th the Beachwood first aid responded to the scene of a motor vehicle accident involving 2 Pine Beach police officers. Some of our members witnessed the accident and were the first to respond and report what had happened. Our members worked hard to treat our brothers from the Pine Beach police department with help from the South Toms River first aid squad and the Toms River Police first aid. both police officers were treated and transported to Jersey Shore medical center ...

On July 14th a little after midnight the Beachwood first aid was dispatched to a reported motor vehicle accident at 79.5 on the GSP. Due to panicked callers the exact location was un clear. our crew in 158 already on the parkway responded quickly going to the reported location and found no accident. the crew continued south in hopes that they were near by. The accident was located by the State police at mile marker 73. Already being half way our crew continued in to help with pt care till l...

At approximately 930 on july 2nd the Beachwood First Aid was dispatched to respond to a possible structure fire with the fire department. upon arrival captain horn updated the dispatch center of a working fire. While lightning lit up the sky members from the Beachwood And Pine Beach Fire Dept worked to extinguish the blaze. the members of the Beachwood first aid remained on scene top assist with any injuries. The fire was brought under control with no injuries. Also on scene was the Manitou...

How did you find our site?

Copyright © 2006-2021. YourFirstDue Inc. All Rights Reserved. Designated trademarks and brands are the property of their respective owners. Content on this web site is supplied by Beachwood Emergency Medical Services. YourFirstDue Inc. cannot be held responsible or liable for any content, text, pictures, or any other media found on this web site. Maintained by the members and staff of Beachwood Emergency Medical Services.
Management Login
Powered by